You may have never heard of Catalina Island before, but at one time this 22-mile long island off the coast of LA was a major destination for celebrities like Charlie Chaplin, Clark Gable and later on, Marilyn Monroe (think the Great Gatsby, West Coast style). The first and only time I’ve seen any national recognition of this Southern California getaway was on a Growing Pains episode in the 90’s, that was supposed to take place in Southern Europe. There it was- right behind Kirk Cameron, the ubiquitous sea foam- green railing of the waterside walkway and the arched facade of the famous Casino built in the 20’s- it wasn’t Malaga or Nice I was seeing, it was Southern California. And that’s when I realized I had always taken for granted this coastal gem, only a (sometimes rocky) forty-five minute boat ride from Long Beach.

After traveling on a number of other coasts (the Mediterranean included), Catalina remains one of my favorite places in the world. It’s just a little cheesy, slightly retro and as beautiful as any seaport on the European Riviera. Southern California families that come here for summer trips (like mine) are loyal to the island: they come year after year, generation after generation. After 28 years of visiting the island, and probably twice as many trips, here’s my perfect 24 hours on the island:

7:30 am: If you’re really dedicated to milking your 24 hours here, you can leave on the 6 am boat from Long Beach which will take you directly to Avalon. Enjoy the boat ride and if you want to splurge, pay extra for the “Commodore Lounge” (the free bloody mary is worth it). Once you arrive, walk into town and stop at C.C. Gallagher’s for a latte on the patio, while you watch the tourists trickle in.

9 am: By now you’re sufficiently fueled, but resist the urge to explore town until later and take a hike up the backside of the island on Wrigley Road for a workout and an aerial view of the town (as shown above). Wrigley Road can be accessed easily from the south side of town and is essentially up the street from C.C. Gallagher’s. It wraps up the island, peaks at the Inn on Mount Ada, an old-school bed and breakfast, and descends back into town by way of Lover’s Cove, an awesome snorkeling spot and eating hub for the CA state fish, the Garibaldi (essentially a giant goldfish). If you’re ambitious, take a dip and bring in some crackers to encourage the feeding frenzy. The hike takes a total of about one hour.

10:30 a.m. Starving for breakfast? Head over to Jack’s, a retro-style diner with just about everything on the menu (huevos rancheros, crab cake benedict, swedish pancakes). Lunch? You’ve got to try Rosie’s on the end of the pier for crisp fish and chips. The original Rosie doesn’t run the place anymore, but she handed over her recipe to the new owners and having met her, I can say the woman is a legend (you’ll just have to meet her to find out why). Enjoy your seafood brunch at the end of the pier and watch the mash of locals and tourists fish for the daily catch.

12 noon: Okay, now you can cruise the length of Avalon, which is part of the charm of Catalina. One of the main activities is just that: meandering along the pedestrian-only main street (Crescent Way) to window shop and people watch. Lloyd’s (noticing a trend here with shop names…) is a Catalina classic, mainly because it’s got a giant saltwater taffy puller in the front window. If you’re really lucky, you’ll get to watch the giant metal tongs in action, pulling long shiny goo into what will later become tiny plastic-wrapped packs of flavored taffy. Try the taffy but please don’t overlook the caramel covered apples smothered in chopped nuts and chocolate drizzle.

2 p.m.: Make your way down Casino Way to Descanso Beach, at the north end of town. Although Catalina doesn’t see a lot of change (thanks to strict laws about development), Descanso Beach has seen a lot of transformation in recent years and has become just a little glamorous. Beach meets bar meets wedding venue, it’s got clear water and an awesome view of the Casino. Rent a cabana for the day, or set up camp with the rest of us on the sand. If you’re in the mood, order the Catalina cocktail: the buffalo milk, named for the hordes of buffalo that roam the backside of the island brought over for the filming of a Western in the 20’s. Descanso is a beach to lounge on, so bring a book and relax. That’s what Catalina is for. 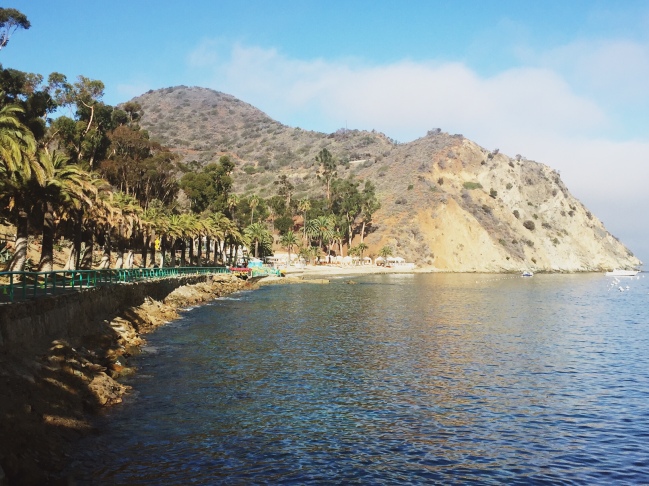 6 p.m.: Grab dinner before you head over to the Casino to see a movie. They only play one film per week, so that takes the stress out of choosing. I might grab appetizers and a drink at the Bluewater Grill, but if you want to keep it real, buy a cheeseburger and fries across the way at Coney Island’s. Enjoy your dinner outside, and take in the ambiance: bands of tourists, buzzing golf carts and swaying, dimly-lit docked boats. It’s been less than 12 hours, and you’ve seen the town: it’s all part of the charm.

7 p.m. Finally, head over to the most iconic building on the island: the Casino. In the early-mid twentieth century, the Casino ballroom was the scene on Catalina (now it’s Luau Larry’s– oh well). But my favorite part is the movie-theater: old-school with red plush seats, this theater has an art deco- style panoramic mural of underwater scenery with mythological fantasy thrown in. Buy a ticket and some popcorn and get there early to check out the interior. After the movie is over, stop at Big Olaf’s for a waffle cone of mint chocolate-chip. You won’t be able to resist the sweet late night waft of batter on the griddle, so don’t even try (it’s all about the cones, not the ice cream).

If you’ve gone to the movies, you’ve already missed the last boat, so spend the night at the Pavilion Lodge, right in the center of town, or if you’re trying to save a little more cash, there are some less expensive options in town, like the Hotel Atwater. Head back the next day back to the crazy of LA, or wake up and do the whole thing over again.

One thought on “A perfect 24 hours on Catalina Island”

Life enthusiast, hummus addict, & California native. I blog about topics that run the gamut from spiritual perspective to salad. Because you’ve got to learn how to have faith, and you’ve also got to learn how to cook a decent meal. And you can screw up both those things, and still try again.